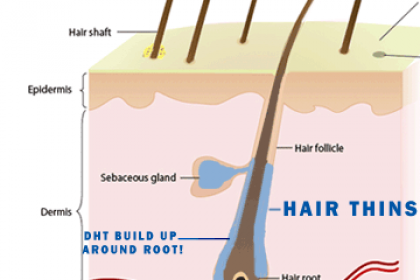 DHT is a sex steroid and an androgen hormone. It is produced in the gonads. Roughly 5% of free testosterone is normally converted into DHT.

The enzyme responsible for converting testosterone to the more potent DHT is called the 5-alpha-reductase (5-AR).

What is the role of DHT?

DHT are responsible for the biological characteristics that characterize males in individual – formation of male genitalia, deep voices,

What is the problem with DHT?

DHT is entirely necessary for most hair growth on the body but is detrimental to head hair growth. DHT attach to androgen receptors on

hair follicles and genetically trigger the receptors to begin miniaturizing, disrupting normal hair growth. To back this up, researchers discovered

higher levels of DHT on follicles and skin of balding scalps than those from non-balding scalps. Male pattern baldness sufferers are actually

of follicles and ending the production of cosmetically acceptable hair.

FINAS TERIDE is a type 2-selective inhibitor of 5-AR. Since DHT is a much stronger androgen than testosterone with about three to five times more

binding strength to the androgen receptor, the removal of 5-AR from these tissues can dramatically blocked the formation of DHT. Rather than act upon the hair follicles,

Propecia is believed to act on the prostate to inhibit the enzyme 5-AR which directly inhibit DHT’s production.

The drug is available in tablets form and is marketed under two product branding, namely Aindeem and Propecia. The daily dose is one tablet (1mg)

and it is strictly for use in adult men only. It must not be taken by anyone aged under the age of 18 years or by women as it is harmful to unborn baby.

It might also trigger allergic reactions in some adult men, rendering them unsuitable to consume the medicines.

Nevertheless, studies of its efficacy have yielded impressive results within a few months with very rare (1-3% of men) side effects regarding to sexuality such

as loss of libido, reduced erection ability and/or decrease in ejaculate. However, the medication must be taken orally daily and indefinitely for if the medication

is stopped, the balding will continue. Propecia offers hope to people suffers from hair loss but it does not reverse the problem quickly nor permanently as some

people took longer time (up to a year) to notice the full benefits. It might not be the final answer to many but it could be a less risky alternatives than surgery.

However, while waiting for the medication to produce results, one could always look into other faster result-producing products such as Toppik Hair Building Fibres at www.toppikmalaysia.com/shop .

All the hair loss treatments in the world will have minimal effect to your hair loss problems if the scalp on your head is still occupied by high concentration of DHT.

Thus, this is where Anti-DHT shampoos come in to play their roles in cleaning and clearing out as much dead skins, pollutants and DHT from your scalp as possible.

These shampoos contain special ingredients to reverse the shiny balding skin on your head and to promote hair growth by having DHT blocker ingredients.

If you suffer from hair loss problem and are using a shampoo, it’s worth massaging quality ingredients to your scalp daily that may also help to reduce scalp DHT levels.

When checking for DHT blocker ingredients, it is also important to note the volume of active ingredients because a low amount is unlikely to produce satisfying results.

That said, it’s better to go for a shampoo with less ingredients, but higher levels of the important active ingredients.

It is also useful to look up for other ingredients according to individual needs. For instances, niacin works in increasing the blood circulation in the scalp, biotin aids

in cells production in the scalp, jojoba oil increases hair growth while zinc and ketaconazole helps to reduce fungal infections in the scalp.

Various plant extracts, Rosemary oil, vitamin E and B-vitamin complex are thought to be beneficial for hair growth and hair health in overall.

For a quick makeover with headful of hair for special occasion, you can just get the dream product at www.toppikmalaysia.com.

While waiting for your shampoo or your oral medicine to kick in, Toppik Malaysia provides a safe and satisfying results within seconds.

It could be your best hair cosmetic products ever, just log on to www.toppikmalaysia.com/blog to understand more about it.

For full head of hair in 30 seconds , TRY TOPPIK !