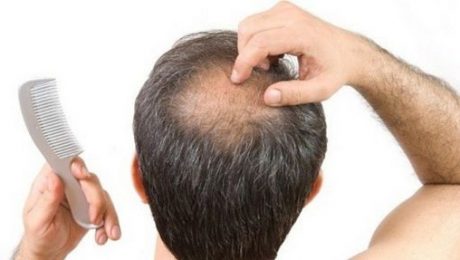 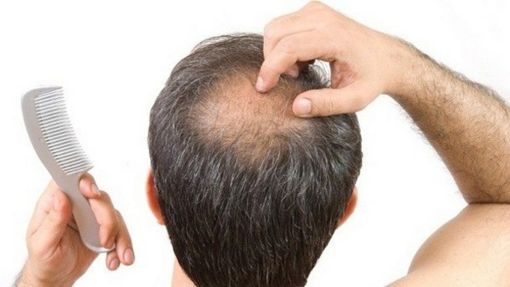 Propecia rapidly lowers serum and scalp dihydrotestosterone levels by more than 60 percent. It has no affinity for the androgen receptor and therefore does not interfere
with the actions of testosterone , and it has no androgenic, estrogenic, progestational, or other
steroidal effects.

In three randomized, double-blind, placebo-con-
trolled studies, a total of 1879 men who were 18 to
41 years old with mild to moderately severe thin-
ning of the hair but not complete baldness received
oral finasteride at a dose of 1 mg per day or placebo
for one year.

Two of these studies enrolled a total
of 1553 men with loss of hair predominantly at the
vertex, and the third enrolled 326 men with predom-
inantly frontal hair loss. As compared with placebo,
finasteride significantly increased hair counts and im-
proved scalp coverage, as was evident in photographs
of both vertex and frontal regions.

Propecia In the men with hair loss at the vertex, the initial
treatment was continued for a second year, but some
men who received placebo for the first year were giv-
en finasteride and some who initially received finas-
teride were given placebo in the second year

In the second year, hair counts remained stable at
the increased level in the men who continued to re-
ceive finasteride. Hair counts decreased in the men
who were switched from finasteride to placebo after
one year, whereas the counts increased in those
switched from placebo to finasteride. There was a pro-
gressive increase in scalp coverage, as determined by
global photographs of the scalp, in 66 percent of the
finasteride group, as compared with 7 percent of
the placebo group, after two years.

The results indicate that the number of responding hairs is established after about one year and that continued treatment increases the length, diameter, and pigmentation of these hairs so that coverage of the scalp increases.
After two years of treatment with Propecia, about two thirds of men have improved scalp cover age, about one third have the same amount of hair as
they did at the outset, and about 1 percent lose hair.Since the miniaturization of follicles occurs over the course of many years, reversal of this process also takes
many years. With treatment for more than two years, the clinical impression is that scalp coverage continues to increase; five-year controlled studies are in prog-
ress to verify this impression. It is not known to what extent follicles will enlarge, and there is no way to identify the men who will have the best response.

In December 1997, 1-mg tablets of finasteride were approved by the Food and Drug Administration (FDA) for the treatment of androgenetic alopecia in
men. It is to be given once daily, with or without food. No dosage adjustments are needed on the basis of age or renal function. It is metabolized in the
liver and should be used with caution in men with abnormal liver function. In men who are 60 years of age or older, finasteride may not be an effective treat-
ment for male pattern hair loss

Minoxidil promotes hair growth when it has been affected by various conditions, including androgenetic alopecia. It increases the duration of anagen and
enlarges miniaturized and suboptimal follicles, irrespective of the underlying cause. For example, in addition to its effectiveness in patients with androgenetic alopecia,

minoxidil promotes hair growth in patients with alopecia areata, congenital hypotrichosis, and loose anagen syndrome. Minoxidil was developed to
treat hypertension, and this aspect of the drug’s action is the one that is best understood. It is a potassium channel opener and vasodilator. Its mechanism of action with respect to the stimulation of hair growth is not known, but it appears to be independent of vasodilatation.

The addition of minoxidil to cul-
tures of hair follicles increases survival.

A 2 percent solution of topical minoxidil was ap-
proved by the FDA in 1988 for promoting hair
growth in men with androgenetic alopecia. Its effica-
cy was established in a 12-month placebo-controlled
study of 2294 men who were 18 to 50 years old and
had mild-to-moderate thinning of the hair at the
vertex. Treatment with minoxidil significantly in-
creased hair counts.

Histologic studies con-
firmed that minoxidil increases the diameter of the
hair shaft.

The efficacy of drugs that stimulate hair growth
can also be assessed by clipping and weighing hair
grown in a small, marked area on the scalp.

This method was used in a 96-week double-blind study
of four groups of nine men with androgenetic alopecia.

Three groups received one of the following:
5 percent topical minoxidil, 2 percent topical minox-
idil, or placebo; the fourth group received no treat-
ment. Hair samples were taken from the frontal area
of the scalp. After 96 weeks, treatment was stopped
and the men were followed for 24 more weeks. Both
solutions of minoxidil were significantly superior (P<
0.05) to placebo or no treatment in promoting hair
growth and slowing hair loss, with the 5 percent so-
lution having the greater efficacy (Fig. 3); the placebo
and untreated groups had a steady decrease in hair
weight of about 6 percent per year. In the groups re-
ceiving minoxidil, the peak hair weight was followed
by a similar small decline during this period. Never-
theless, the hair weight in the minoxidil groups was
about 30 percent greater than that in the placebo
and untreated groups. The rapid loss of hair weight
after treatment with minoxidil was stopped (Fig. 3)
confirms its substantial growth-promoting effect.
Minoxidil initially causes a surge of growth in min-
iaturized hairs (Fig. 3). These hairs continue to have
a shortened growth cycle and fall out quickly, which
explains the temporary increase in shedding that pa-
tients may notice after 10 to 12 weeks of therapy.
One milliliter of minoxidil solution must be applied
twice daily to achieve and then maintain efficacy.

The solution is applied to the scalp and spread lightly
with a finger; massage is not needed. Spray applica-
tors are not recommended, because most of the so-
lution reaches the hair rather than the scalp. Men us-
ing minoxidil who wish to take finasteride should
continue to apply minoxidil for at least four months
after starting finasteride to prevent the loss of hair
that occurs after the cessation of minoxidil treatment

The adverse effects of topical minoxidil are mainly
dermatologic. Irritation of the scalp, including dry-
ness, scaling, itching, and redness, occurs in approx-
imately 7 percent of patients who use the 2 percent
solution and in more of those who use the 5 percent
solution because of its higher content of propylene
glycol. Minoxidil or the formulated solution may also
cause allergic contact dermatitis or photoallergic con-
tact dermatitis.

With the 5 percent solution, the mean serum level of minoxidil is 1.2 ng per milliliter, well
below the level of 20.0 ng per milliliter at which
minimal hemodynamic changes in pulse rate and
blood pressure occur