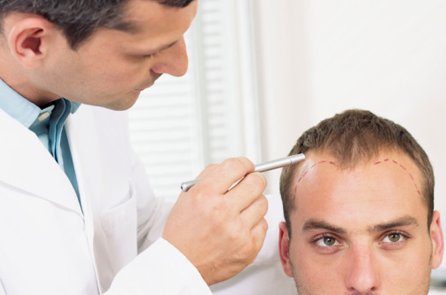 Genetic Hair loss or Hereditary-pattern baldness is the most common cause of hair loss. Genetic Hair loss is not really a disease, but a natural condition caused by some combination of genetics, hormone levels and the aging process.

Almost all men and women will notice hair loss or hair thinning as they age. However, up to 40% of men and women will experience a more obvious form of this condition. Hair loss typically begins in the 20s and 30s, although in women the changes are most noticeable after menopause. The condition is also called androgenetic alopecia and, in men, male-pattern baldness.

Researchers have begun to understand more about the cause of this type of hair loss. Under the influence of a form of the male hormone testosterone, the normal cycle of hair growth changes, resulting in shorter, thinner or “miniaturized” hair. Eventually, hair growth in certain parts of the scalp stops entirely, which causes the typical pattern of hair loss. Contrary to the folk wisdom that baldness is inherited from one’s mother’s family, the condition seems to depend on genes contributed by both parents.

Genetic Hair loss starts with thinning of the hair and often progresses to complete hair loss on parts of the scalp. Hairs on the pillow, in the tub or on the comb are unreliable symptoms of hair loss. The average non-balding person loses 100 hairs per day, and more hair may fall out under certain circumstances, such as after childbirth or a serious illness.

Male pattern baldness or androgenetic alopecia. “Andro” refers to the androgens (testosterone, dihydrotestosterone) necessary to produce male-pattern hair loss (MPHL). “Genetic” refers to the inherited gene necessary for MPHL to occur. In men who develop male pattern baldness the hair loss may begin any time after puberty when blood levels of androgens rise. The first change is usually recession in the temporal areas, which is seen in 96 percent of mature Caucasian males, including those men not destined to progress to further hair loss.

In men, hair loss typically begins at the temples and crown and proceeds in an M-shaped pattern. In the most advanced stage, only a rim of hair along the side and back of the scalp remains.

In women, hair loss tends to be more widespread but better hidden. The top of the head down the middle is most commonly affected, often in a “Christmas tree” pattern. In contrast to men, the hairline along the forehead and temples usually remains normal in women. Complete loss of hair in any one place on the scalp is unusual and may suggest that a different problem is the cause, such as alopecia areata (an immune system disorder that causes bald patches), a fungus infection or one of a number of other skin conditions.

Androgens (testosterone, dihydrotestosterone) are necessary for the development of male pattern baldness. The amount of androgens present does not need to be greater than normal for male pattern baldness to occur. If androgens are present in normal amounts and the gene for hair loss is present, male pattern hair loss will occur. Axillary (under arm) and pubic hair are dependent on testosterone for growth. Beard growth and male pattern hair loss are dependent on dihydrotestosterone (DHT). Testosterone is converted to DHT by the enzyme, 5α -reductase. Receptors exist on cells that bind androgens. These receptors have the greatest affinity for DHT followed by testosterone, estrogen, and progesterone. After binding to the receptor, DHT goes into the cell and interacts with the nucleus of the cell altering the production of protein by the DNA in the nucleus of the cell. Ultimately growth of the hair follicle ceases.

In summary, male pattern hair loss (Androgenetic Alopecia) is an inherited condition manifested when androgens are present in normal amounts. The gene can be inherited from the mother or father’s side. The onset, rate, and severity of hair loss are unpredictable. The severity increases with age and if the condition is present it will be progressive and relentless.

Genetic Hair loss usually is diagnosed by both its pattern and a history of a similar type of hair loss affecting family members. In most people, no further tests are required.

If you begin to lose hair in a hereditary pattern, you may be able to slow further hair loss by using minoxidil (Rogaine) or finasteride (Propecia). Minoxidil can be used by both men and women, while finasteride usually is used just for men.

Minoxidil is a solution, now available over the counter. It is applied to the scalp twice daily. It can help to slow further hair loss in some people, and within four to eight months there may be some hair regrowth. In men a higher strength (5%) works best. In women there seems to be little difference in effect of the 2% strength and the 5% strength, and there is the risk of development of facial hair with the 5% strength. One caution: If you stop using minoxidil, you probably will lose any hair that may have been retained or restored by the medication.

Finasteride is a prescription-only pill that blocks the formation of the type of testosterone that affects hair growth. Higher strengths of the same medication are used in men to stop non-cancerous (benign) growth of the prostate gland. Studies suggest that finasteride helps to prevent hair loss in up to 99% of men with hereditary-patterned baldness, and that two-thirds experience some new hair growth. As with minoxidil, any benefits from the medication are quickly lost once it is discontinued. In addition, a small number of men develop difficulty with sexual function.

Finasteride does not appear to prevent hair loss in women. It also may cause birth defects, and should not be used by any woman who could possibly get pregnant. However, other types of hormonal treatment, such as certain types of birth control pills, may help the small number of women with hair loss that have elevated levels of male hormones.

In some people, hair loss may be caused by certain hair treatments (straightening, coloring), hairstyles (tight braids) or hair pulling. These do not cause hereditary-pattern baldness, but they may contribute to hair loss and should be discontinued.

A variety of other creams, oils, lotions and herbal remedies for hair loss are regularly advertised. However, only minoxidil and finasteride have been proven useful.

Some over-the-counter scalp treatments can cause irritation or harm and worsen hair loss.

Minoxidil and finasteride may prevent hair loss and promote new hair growth. This effect, however, is quite unpredictable from one person to the next.

Hair weaves, wigs and toupees can be used. In addition, a variety of surgical techniques also can be used, including:

Other hairloss causes can be found here

As pioneers in the category of cosmetic products for hair fullness, Toppik continues to develop their range of hair care solutions that transform the appearance of thinning hair instantly and without detection. For over 30 years, stylists and celebrities, as well as millions of women and men worldwide, have looked to Toppik for products that transform and volumize hair.

The secret is in the fibers. Toppik Hair Building Fibers easily blend with your existing hair, instantly making it look full and thick in just 30 seconds!

Try one for yourself now to believe !

Type of hair replacement in the society